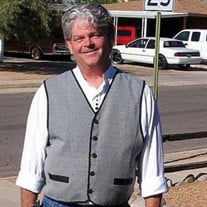 On Monday May 24, 2021 Gregory James Horton (Greg) of Tucson Arizona passed away at the age of 66 after a short battle of aggressive lung cancer. He is survived by his mother Lois Edwards of Coxsackie NY, and his father and step-mother Kenneth and Charlene Horton, along with his companion of 25 yrs Maria Creighton of Tucson Arizona. He is also survived by his siblings Jeff, Ken, Kevin, Micah and Tamara (Jackson) Horton as well as his children Jessica, Christopher, Bryan, Stefan, Emmett and step son Enrique and their extended families including 5 grandkids. Greg leaves behind many cousins and friends around the country. Greg entered the Navy in 1972 after graduating from Coxsackie-Athens High School in Coxsackie New York where he served as a Hospital Corpsman from 1972-1978. On April 25th 1978, he was discharged from the Navy and moved to Tucson, Arizona where he happily lived until his passing. Greg was employed at Applied Industrial Technologies for 38 years, and was loved by all of his co-workers. Greg was an avid lover of music and although he had many favorite artists; Bob Marley, Rod Stewart, the Herman Hermits and almost anything Reggae to name a few, he really loved all music. He didn’t care as much about the genre as he did the message each song created. It was music that contributed greatly to his infectious laughter and smile and it was music that charged him up daily. Along with music, there were many other loves. A big one being that of any animal on the planet. He regularly would have a few K-9 companions and you can find an unlimited number of photos posted on his Facebook page that revealed his deep care and love for each. He was a “Don’t kill that fly, open the door and let him out” kind of guy. He had great respect and love for a number of things in life, a few of them being the Dallas Cowboys, the U of A basketball team, and martial arts. He was an avid Dallas Cowboy fan and supported America’s Team loud and proud and never wavered on his stance. Greg attended Ernie Reyes West Coast World Martial Arts where he held a red one belt in Karate and was one test away from his black belt test. There he trained hard along with his family and always pushed himself to be the best that hecould be! A few more of his greatest loves that he enjoyed sharing with the world through pictures were Christmas, Arizona sunsets, and dragons. Although these may not seem to be a likely trio, Greg loved them all and posted pictures of each on a regular basis. On one day there would be a beautiful scene with trees and a house covered in snow and the next day a photo of a fire breathing dragon in pursuit of victory. On a regular basis one of his brothers would challenge him on the reality of the existence of dragons to which he would post a dragon picture and say “Then explain this”. And, he never let us forget how many days were left until Christmas, usually starting in January. Greg was a very loving, caring person with a huge heart but, he also had a devilish side where he would love to catch you off guard and prank you (especially his co-workers) and then turn around and laugh his head off and say Gotcha!! I am sure that there are a lot of great stories that will be shared! Gregory James Horton, as a person, was a believer that everyone was created equal, that we all should love our neighbor no matter what, we should turn the other cheek, two wrongs don’t make a right, and that we are all God’s children. These are the words written on the torch of life Greg decided to pick up and run with. A celebration of Greg’s life will be held on Sunday, July 25, 2021 from 4pm until nightfall. We will be celebrating at Chuck Ford Lakeside Park located at 8201 E. Stella Road Tucson, AZ 85730. A dish to share with family and friends can be brought to the celebration in lieu of flowers. Greg and the love that he had for life and his family will be missed but his spirit will always live within us!

On Monday May 24, 2021 Gregory James Horton (Greg) of Tucson Arizona passed away at the age of 66 after a short battle of aggressive lung cancer. He is survived by his mother Lois Edwards of Coxsackie NY, and his father and step-mother Kenneth... View Obituary & Service Information

The family of Gregory James Horton created this Life Tributes page to make it easy to share your memories.

Send flowers to the Horton family.