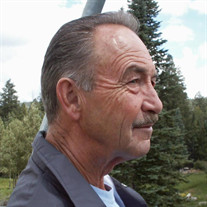 Theodore Tucson Manke went to reside with our Lord in Heaven on March 28, 2021 after valiantly battling cancer. Ted was born in Tucson, AZ on April 5, 1945 to parents Henry & Dorothy Manke during the time his Father, an engineer, helped design the Mount Lemmon highway. His family later settled in Los Angeles, CA where he grew up and attended school. After graduating, he became a cowboy in the Northwestern states herding horses and cattle, getting his hands dirty and taking pride in “Cowboyin’”and working hard. Ted served in Vietnam with the Army. Although the servicemen and women who fought in Vietnam received no recognition or respect upon returning home, Ted was passionate about acknowledging our soldiers’ sacrifices and generously gave to various charities supporting veterans’ causes. He never missed an opportunity to fly the flag proudly outside his home. He was employed with Chevron as their Maintenance Mechanic on and off for 40 years during which time opening his own business servicing filling stations. His father’s engineering influence was apparent in anything Ted built. He dearly loved all the animals and pets that were fortunate enough to have shared his home. He relished the outdoors and spent as much time possible fishing, gardening and seeking out projects allowing him time outside but, also greatly loved reading. Although he was a man of few words, his brevity left no one wondering what he was thinking or where he stood on issues he was passionate about. This man was a gift to everyone whose life he touched – family, friends, even those he never met. If the words “pay it forward” were in the dictionary, his picture would be beside them. He was a kind, considerate, humble, strong and loving man. Ted always took the initiative without needing to be asked. His wife never had a “honey do” list as it was fixed before she even knew it needed attention. A more honest man never walked the earth. He was someone you’d want in your corner. He leaves behind his wife of 22 years, Claudia Manke, his daughters Heather Merriman, April Manke and step-daughters Suzanne Kerrigan and Shannon Casey as well as son, Eric Manke, step-son Chris Campbell, sister and brother-in-law Diane and Ken Sleeper and grandchildren Blake and Megan Merriman, Jordan Franco, Kela Casey, Joshua Hand, Alex Rentie and Alex Campbell. He will also be missed by Aunt Janet Schuster, niece Kerry, nephews Kevin and Christopher and great-grandchildren Arya and Taimane. He was predeceased by his parents and sister, Jean Creed. Ted loved flowers but, asked that in lieu of flowers, donations be directed to one of these deserving charities: Paralyzed Veterans of America Disabled American Veterans VFW Tunnel to Towers Foundation https://tunnel2towers.org/ Second Amendment Foundation Guiding Eyes for the Blind The Heritage Foundation Community Food Bank

Theodore Tucson Manke went to reside with our Lord in Heaven on March 28, 2021 after valiantly battling cancer. Ted was born in Tucson, AZ on April 5, 1945 to parents Henry & Dorothy Manke during the time his Father, an engineer, helped design... View Obituary & Service Information

The family of Theodore Manke created this Life Tributes page to make it easy to share your memories.

Theodore Tucson Manke went to reside with our Lord in Heaven...

Send flowers to the Manke family.