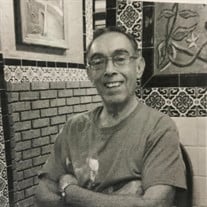 Richard (Dick) Gradillas passed away Friday, December 18 and entered into his heavenly home. He had been diagnosed with what his wife, Grethe, called a “vicious thyroid cancer.” He was 77 years old. A Memorial Mass was celebrated in his honor on Tuesday, Dec. 22, at St. Margaret Mary Alacoque Catholic Church, 801 N. Grande Ave., Tucson. Richard attended All-Saints School, from 1st to 8th grade. At Tucson High School, he was on the quarterly production staff and the track team. He also played softball and basketball in recreational leagues. After graduating from THS in 1962, he worked at Food Giant and entered the Army. While stationed in Germany, Dick met Gerthe in Copenhagen, Denmark and they married in Germany 53 years ago. After his discharge from the Army, he took the job for Magma at the San Manuel mine and worked as a pipefitter there for 30 years until the mine closed. He had “loved his profession at the mine and had been totally happy figuring out how to do the best in the smelter and crusher,” Grethe said. Not ready for retirement, Richard worked for 10 years as a custodian at Townsend Jr. High and later in preventive maintenance. In addition to family activities on Brichta Dr., he learned about sports, especially basketball (March Madness) and following, “win or lose,” the Green Bay Packers. Richard had been involved in recent years with the Vatos social and community group and worked out regularly at a gym. In addition to Grethe, he is survived by three children- Betty Pauline Gradillas, Linda Knop and Raul Gradillas, all THS graduated, and seven grandchildren; Damon Woods, Ariana Polanco, Enrique Polanco, Aurdry Knop, Braden Knop, Cadence Gradillas and Makayla Gradillas; five siblings, Norma Kuligowski, George Gradillas, Al Gradillas, Maria Valenzuela and Joe Gradillas.

Richard (Dick) Gradillas passed away Friday, December 18 and entered into his heavenly home. He had been diagnosed with what his wife, Grethe, called a &#8220;vicious thyroid cancer.&#8221; He was 77 years old. A Memorial Mass was celebrated... View Obituary & Service Information

The family of Richard Gradillas created this Life Tributes page to make it easy to share your memories.

Send flowers to the Gradillas family.