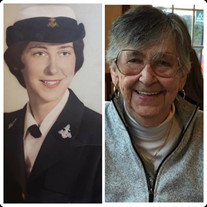 Lynda Jane Pouliot died in Tucson, Arizona on Thursday, November 11, 2021 after a long illness. Lynda was born in Uxbridge, Massachusetts to (the predeceased) Nelson and Mary (Shugrue) Pouliot. Lynda leaves her son, Robert Marchand of Lincoln, Nebraska, her grandson, Robert Delacy of San Diego, California, her granddaughter, Amanda Murguia and her wife Susana Murguia of Tucson, AZ, brothers Nelson Jr and Michael of Florida, her sisters Judy, Maryellen, and Elizabeth of Massachusetts, and her sister Patricia of Rhode Island, and many beloved nieces and nephews. In addition to her parents, Lynda was also predeceased by her sisters Margaret and Pauline. Lynda graduated from Uxbridge High School. She enlisted and served in the US Navy during the Vietnam War. She was one of the first female air traffic controllers in the US military. Lynda was a self described gypsy. She lived all over the US and in Tawain. After her Navy service, Lynda graduated from Quinsigamond Community College in Worcester, Massachusetts. She became a social worker for the state of Massachusetts until she retired in 1989. Lynda moved to Broward Co. Florida and lived in south Florida for over 30 years until she relocated to Tucson, Arizona in January of 2021 to be closer to her granddaughter. Lynda leaves behind her love for all things Bette Midler. She was a dedicated and loyal New England Patriots fan, a lover of the ocean, card games, plants, and Autocrat Coffee Syrup, but the true loves of her life were her son and grandchildren. Lynda shared a special relationship with her Sweet Pea, her granddaughter Amanda, who cared for her beloved Mem with compassion until her last day. Chow (ciao) babe. "Thou shall not sweat" Commandment 11 in the Proverbs of Lynda.

The family of Lynda Jane Pouliot created this Life Tributes page to make it easy to share your memories.

Send flowers to the Pouliot family.