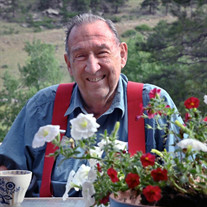 Lindrith “Lin” Cordell Lindrith “Lin” Eugene Cordell, 86, of Evergreen, Colo. and Tucson, Ariz., died on Sunday, October 3, 2021 at Carondelet St. Mary’s Hospital in Tucson after a short illness at the end of a long and full life. He was born on March 23, 1935 in Santa Fe, N.M. to Lindrith Cordell Sr. and Margaret Heshion Cordell. Both preceded him in death along with his longtime stepmother, Norma Cordell; his sons, Paul Nils Cordell and Lindrith “Lindy”(Cordell) Davies; and a daughter-in-law, Denise Ruth Myrup. He is survived by his wife and partner in adventure of nearly 50 years, Maureen Ollry Cordell. Lin’s childhood was spent in New Mexico and Kansas and in South America, where his father worked for road-building companies in Colombia and Venezuela. Lin learned Spanish early in his life and always enjoyed speaking Spanish, and singing in Spanish while accompanying himself on guitar. While attending the University of New Mexico in Albuquerque he had a tightknit circle of friends that gathered to play music as the Tuesday Afternoon Juapango Society; they remained close friends throughout their long lives. After earning his bachelor’s degree in geology with a minor in engineering in 1958 and master’s degree in geology in 1962,, Lin worked in Sweden and then interned at the U.S. Geological Survey (USGS) in the Washington, DC area. He also took post-graduate courses at George Washington University. His USGS internship ended but he kept showing up for work every day and was eventually hired. He would go on to a more than three decade-career as a geophysicist with the USGS, most of it spent in Denver where he rose to the position of Section Chief. His area of expertise was the Rio Grande Rift. He was known as a globetrotting geophysicist because his field work, lectures, published papers and professional connections took him all over the country and the world. Lin was a fellow of the Geological Society of America, and a member of the American Geophysical Union, Sigma Xi, and Society of Exploration Geophysicists. He was a mentor and advocate for several younger colleagues. Lin and Maureen had moved their family from Maryland to Colorado in 1971 due to his new Survey posting in the Denver area. After initially living in Golden CO, the family moved in 1974 to a 10-acre property in Evergreen, in the foothills of the Rockies with a mountain across the street. This became known as the Kerr Gulch Lamb and Cattle Co., where the children learned under their parents’ guidance how to raise sheep and rabbits, run an egg business, tend to meat cows, milk the goats, care for a horse, and participate in 4-H. He also loved cross country skiing, going to the opera and Friday night movies, eating wonderful meals made by Maureen (especially New Mexican dishes), feasting on crabs when visiting the Eastern Shore of Maryland, making croissants and cafe au lait to serve to everyone in bed on Sunday mornings, carefully reading nonfiction and newspapers, collecting interesting old cars including several Volkswagen Karmann Ghias and a VW Microbus, as well as a classic 1949 Chevy stake bed truck named Esmeralda, and engaging in spirited debates and discussions on any and every topic. He took lifelong pride in his Norwegian heritage. The innate Viking yearning for adventure led him and Maureen to decide that their next chapter after retirement would be sailing all along the Eastern Seaboard and down to Venezuela. They made many friends during their sailing years on the Bluebird II, including fellow yachties and also native Venezuelans Loudvina “Quini” Vega, her husband Sergio Reyes, and their son, Alejandro “Alejo” Vega Reyes. When Lin and Maureen finished sailing they bought a camper in Europe, dividing their year between time on the ranch in Colorado and leisurely travel through Europe for months at a time. Eventually they purchased a condo in Tucson, Ariz., where they could escape the cold mountain winters and walk to Pima Community College to take classes in French, Spanish, music, statistics and art history. Lin savored the pursuit of knowledge through college classes into his early 80s. In addition to his wife, Maureen, Lin is survived by two children, Richard Charles Myrup (wife, the late Denise Myrup) of Evergreen, Colo., and Tracy Myrup Sahler (Frederick W. “Erick” Sahler IV) of Salisbury Md.; a daughter-in-law, Kelley L. Cordell (husband, the late Paul Cordell) of Pine, Colo.; two grandchildren, Alison M. Sahler of Philadelphia and Molly M. Sahler of Salisbury; his adopted sister, Sheila Cordell Hickok (Alan) of Rochester NY; nieces; cousins and other family members; and many close friends. A celebration and remembrance of Lin will be planned at a later date.

The family of Lindrith Eugene Cordell created this Life Tributes page to make it easy to share your memories.

Send flowers to the Cordell family.