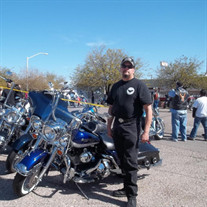 Charles “Chuck” Brandy Kelly passed on November 27, 2021, with the constant company and devoted support from his wife, Josie. Chuck was born in Tucson, Arizona a true Tucson native, where he attended Pueblo High School and became a student of life and lessons learned. He took knowledge bestowed upon him by his father Mike Kelly, and his beloved Uncle Joe and created his own expert craftsman’s talent to all he did. Chuck could easily have built a whole community of homes, with cars, trucks, ATV’s and motorcycles had his health and time given him the chance, that’s how vast his talents were. Chuck never hesitated to learn, create, and expand his knowledge in all laborious tasks that required his undivided attention and craftsmanship towards. This was Charles’s way of letting his inner child be present throughout his life, by finding a problem and creating a solution with his mind and incredible work ethic. His many friends and family members readily benefited from his talents, ingenuity, and generosity. Chuck constantly offered his insights, but his desire for perfection often led him to move you out of his way so he could do it right. Being born in 1968, it was inherent that he’d discover a deep affinity to Elvis Presley. Their connection would be life long, as he permanently attested by having a few Elvis tattoos and later walking through Graceland (three times with his wife Josie in tow) when he turned 40 years old and by playing Elvis music, movies, and videos at Christmas and if he was feeling up to it he might even sing you his favorite Elvis tune. He also developed a deep connection with Harley Davidson motorcycles, that he proudly customized himself and rode even more proudly, always looking to perfect their look and sound and ride. He met the love of his life, Josie, in 2006 through the orchestration of Ben Lucero and Renee Aragon, who later became his Compadres. Chuck immediately knew he had met his match in Josie, especially once he experienced her wit and sampled her home cooking, which was only second to his beloved Nana Francis who had passed earlier the same year they met. Chuck also immediately fell in love with her son’s Joseph and Joshua, making them his own, in every sense that a father would do. A selfless act of love and care that can only be found in some as special as Chuck, he very much raised Joseph and Joshua as his own without hesitation. Once they completed their little family with the addition of Johnathan in 2010, they married on New Year’s Day in 2011 and welcomed the start of every year with their love and commitment for each other and their family. Chuck fulfilled his deep desire to fully establish a family-life, by enjoying countless trips with his wife and sons to Rocky Point, Disneyland, Vegas, camping and fishing trips with his adopted family, The Aragon’s and Verdugo’s, who embodied his family values. He enjoyed countless motorcycle rides and motorcycle rallies to Rocky Point, Laughlin, and Bike Week with his wife Josie. When it came to Boys Night, that generally consisted of meeting up with his trusted riding partner Daniel Robledeno or his Compadre Ben Lucero, as well as periodically include Julio Alvarado, Roque Robles and Jose Chavez, whom he also enjoyed several West Coast bike rallies as well as fulfilled a bucket list item of attending and riding in the Sturgis Bike Rally in August 2021. A true milestone in his life that he had hoped to achieve with his trusted biker family, a brotherhood that was built through trust and respect. Chuck fought a valiant battle with cancer for two years, eight months and sixteen days and as a testament to his strength his three boys and wife will forever remain dedicated to respecting his final wishes, honoring his memory, and preserving his legacy, as he requested. His family knows his spirit rides freely on his Harley, revving that engine as only he could with a grin on his face, listening to his favorite Elvis songs and rock music, periodically stopping to sip some Jack Daniels. He will continue to watch-over and protect his little family and will keep visiting them in their dreams, continuing to share his advice and love. There will always be a bottle of Jack Daniels in the house for when he visits. We do not say good-bye, we say – Be free. Charles “Chuck” B. Kelly passed on November 27, 2021, with his loving wife Josie, by his side, having videos and pictures of the life they shared played, along with his Elvis music. His closest friends Daniel and Ben, along with Renee, Bob, and Blanca visited and gave their love. His father Mike, visited and he received several hours of quiet prayers from his mother, sister and niece who were by his side. He is survived by his wife Josephine (Josie) and their three-sons Joseph (28), Joshua (22), and Johnathan (11). He is also survived by his mother Rosemary Cesare, his father Michael Kelly, sister Lisa Kelly, brother Vincent Kelly, and his half-brother Michael Kelly, several aunts, uncles, cousins, nieces, and nephews. He is also survived by his eldest son Charles Jr and daughter, Jessica Kelly. *Due to the upcoming holidays, a Celebration of Life will be held at a later time. To be determined at a later date in 2022. Our family is beyond grateful to everyone who has expressed and shown our family love and support during this heartbreaking time. In lieu of flowers and funeral donations our family has established a Go Fundme for the Restoration of Chuck’s Truck – a ’57 Chevy that was an unfinished project he entrusted to his wife and sons. This will be a true labor of love! The goal, will be to slowly but surely and as perfectly as possible, bring his vision to life. Please visit this link for more information: https://gofund.me/5ba4396b

Charles &#8220;Chuck&#8221; Brandy Kelly passed on November 27, 2021, with the constant company and devoted support from his wife, Josie. Chuck was born in Tucson, Arizona a true Tucson native, where he attended Pueblo High School and became... View Obituary & Service Information

The family of Charles Brandy Kelly created this Life Tributes page to make it easy to share your memories.

Send flowers to the Kelly family.